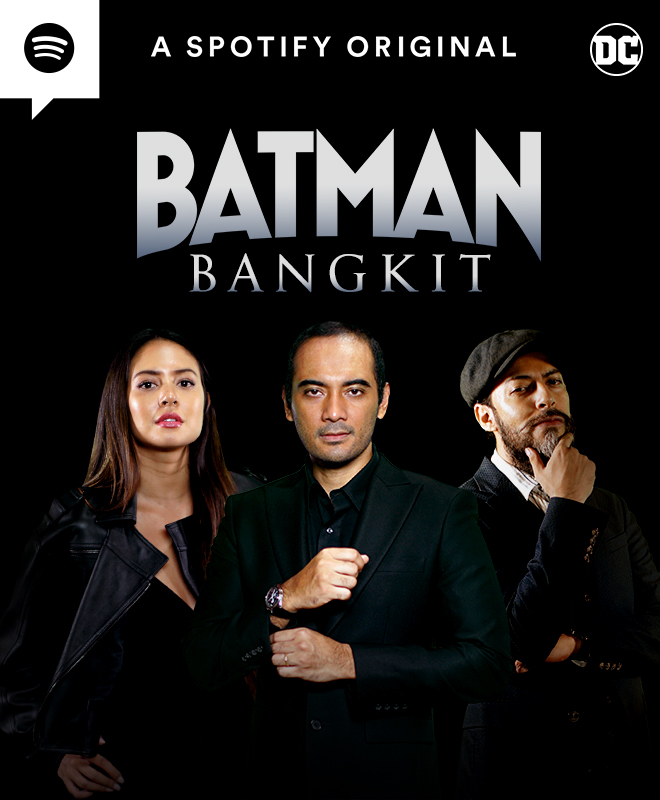 The Indonesian adaptation will be titled “Batman Bangkit”, featuring star-studded local cast such as Ario Bayu as Batman amongst other prominent names in the film industry

Jakarta, April 25, 2022 — Acclaimed Indonesian film director, Awi Suryadi has been appointed to direct the Indonesian adaptation of Batman: Unburied in a Spotify Original podcast series titled Batman Bangkit. Airing soon in May 2022 on Spotify in Indonesia, this podcast project brought international projects to Indonesian shores–roping in the biggest talent in Indonesia today such as Ario Bayu as Bruce Wayne/Batman, Alex Abbad as The Riddler, and Aurelie Moeremans as Kell, to voice those characters.

This is the first project of Spotify’s multi-year agreement with Warner Bros. and DC Comics. First announced in 2020, it consists of a slate of narrative-scripted podcasts that explore the worlds of popular superheroes and supervillains. David S. Goyer, the writer of The Dark Knight Rises, will be the executive producer of this new original series.

In Indonesia, Awi Suryadi will take the mantle of adapting this story in Bahasa Indonesia alongside a slate of superstar local cast via the audio format.

“I feel honored to be part of a global team that is breathing life into the story adaptations of Batman, a superhero I loved while growing up. Having the opportunity to put an Indonesian spin on a well-renowned storyline with Spotify, Warner Bros., and DC Comics is quite a humbling yet exhilarating experience,” enthused Awi Suryadi.

As the director of 22 feature films since 2006, including the famous “Danur” (2017), the 4th highest-grossing Indonesian film of the year, Awi Suryadi will be adopting a suspense treatment on Spotify’s Batman Bangkit. Described as a psychological thriller genre, the podcast Batman: Unburied will feature companion characters who stir suspense and drive the whole storyline, such as the radio announcer on the nightly radio newscast of criminal events in Gotham City. This is one of the unique perspectives that Awi is offering, considering that most Indonesian listeners are intrigued with horror content and are familiar with midnight radio newscasts.

“Many of us will have grown up seeing the heroic story of Batman across multiple platforms, from comics to animation and movies. Now, through the power of podcasting and the audio format, we will get to venture even deeper into the mind of Bruce Wayne (played by Ario Bayu), that opens up another level of understanding of the superhero that we know and love. I’m super excited about this project, and I believe it will be something that the Indonesian fans of the franchise will really look forward to tuning into,” Awi added.

Batman Bangkit is a psychological thriller that will take listeners on a new journey deep into the mind of Bruce Wayne, introducing a slew of dark twists and turns with a number of classic Batman Super-Villains. When audiences meet Bruce Wayne he is a forensic pathologist, working in the bowels of Gotham Hospital and tasked with examining the victims of The Harvester, a gruesome serial killer preying on Gotham’s citizens. Not only will Wayne be forced to face his own mental demons, but he will also have to overcome them to save the citizens of Gotham as his alter-ego Batman.

“Taking a role as my favorite childhood character is an immeasurable satisfaction. I still remember how before going to bed, Batman’s story brought my imagination to a superhero who is mysterious and has a dark side. It was also an inspiration for me to become an actor. Now I am playing the character for the audio content of a drama, a format that is very familiar to me. I hope that in the future Spotify can bring more opportunities and innovations like this,” said Ario Bayu.

The Batman: Unburied podcast is also adapted and released globally in the United States, Latin America, Brazil, France, Germany, India, Indonesia, Italy, and Japan.  For additional details on Spotify’s partnership with Warner Bros. and DC, you can read Spotify’s recent “For The Record” posts here and here.

Listen to the audio trailer of Batman Bangkit here: http://spotify.com/BatmanBangkit

Spotify is the world’s most popular audio streaming subscription service with a community of 406 million Monthly Active Users and 180 million Premium Subscribers. With a presence in 184 markets, and more than 82 million tracks including over 3.6 million podcast titles, it has transformed the way people access and enjoy music and podcasts.

Warner Bros. is a global leader in the creation, production, distribution, licensing and marketing of all forms of entertainment across all current and emerging media and platforms. A WarnerMedia company, the Studio is home to one of the most successful collections of brands in the world and operates category-leading businesses in feature film, television and home entertainment production and worldwide distribution, animation, comic books, video games, themed entertainment, consumer products, brand licensing and broadcasting. Founded in 1923, Warner Bros. has spent nearly a century entertaining global audiences.

DC is one of the largest English-language publishers of comics and graphic novels in the world and home to some of the most iconic and recognizable characters ever created. As a creative unit of WarnerMedia, DC is charged with strategically integrating its stories and characters across film, television, consumer products, home entertainment, interactive games, and the DC UNIVERSE INFINITE digital subscription service and community engagement portal. For more information visit dccomics.com and dcuniverseinfinite.com.